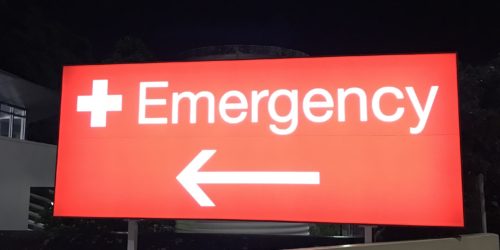 Anyone else with a chronic illness will know what it’s like to ride the merry-go-round of medical professionals; and this year I was referred to a new neurologist, who sent me for updated head MRI scans. It’s been four years since I was initially diagnosed with IIH, so an updated image would help her to understand the current situation.

Having had an MRI before, I knew the drill – super attractive smock, lie in a noisy machine. But this time, the specialists chose to use gadolinium dye to improve the images to be taken. I had signed consent for this, having no known reasons that it could be a problem.

Most of the images of my head were taken before the technician advised me that they were administering the dye (via an IV lure that had been placed before I was put in the MRI machine). Within two minutes of the dye being dispatched, I started to feel hot – I can still recall the prickling heat across my chest as I said to the technician “ah, I think something’s up”.

I had an allergic reaction to the contrast dye, which was such a strange experience to me as someone who experiences a lot of pain. I didn’t feel pain, but a rush of other symptoms that the clinical team recognised – I had a shot of adrenaline at the MRI facility and another before the paramedics shuttled me off to the Emergency Department at Auckland Hospital. I really didn’t think things were that bad – I was shaking violently from the adrenaline but not really in pain – so it was a shock to get to the ED and hear “straight to resus” as if I was on Shortland Street!

After the doctors had done their thing and I was in observation recovering, one of the radiologists brought me my belongings and told me that they had managed to get a good range of images of my head prior to my reaction, and it did look like there had been some improvement in the areas of pressure in my brain (which had led to my IIH diagnosis last time).

When I next met with my neurologist, she explained that after analysis of the images, she was lifting my diagnosis of IIH. So I don’t have IIH anymore, just like that. But because I do still have headache constantly and sometimes to a debilitating degree, I got a new label. Chronic Daily Headache with Migrainous Features. Well, that’s a mouthful to say, but most people at least understand what it means – as opposed to my previous label.

Since I don’t have IIH anymore, I also don’t have to take Acetozolamide anymore. Acetozolamide is a diuretic, used to prevent altitude sickness as well as some types of seizures and also a form of glaucoma. The theory in it’s use for IIH as I understand it, is to help prevent the buildup of spinal fluid which was putting pressure on my brain. I don’t know if it ever helped in that way for me, but it definitely caused a litany of side effects especially when I first started taking it four years ago. Pins and needles in my hands and feet, and an increase in the frequency of heart palpitations I get sometimes with anxiety. Since coming off Acetozolomide though, I have also come out of the fog of severe lethargy that was often keeping me from being able to do much more than shower in a single day.

So, while my pain is still present and sometimes ridiculously high, I have more energy and have been able to actually DO THINGS again. Well, not everything, but a lot more than I was accomplishing while on Acetozolamide. I went on holiday with my parents to Fiji and wasn’t the one to bail out part way through our little rainforest hike; I snorkelled and could dive deep and stay down, and I met a manta ray and decided I could probably SCUBA dive again – so I’m looking forward to that.

I’m still not great, though, with daily pain and some annoying triggers (some sound, light, smell can all make things worse) so I’m on a new course of trials. I’m trialling Botox, due for my second administration next week. 31 tiny injections of botox in my scalp and forehead, which helps some people with headaches like mine but not all people. Apparently patients notice improvement within the period of two treatments, which happen three months apart. I don’t know yet if it’s helping, but it’s certainly meant my killer eyebrow raising skills are compromised… I have to try really hard to frown too but apparently people still know when I’m mad!

At the moment, I’m doing more. And perhaps leaning on my painkillers a little too often in order to achieve that. There are a raft of other drugs I can still try, even after six years of trying to sort this all out, but they still know so little about headaches in general.

Doing more does mean doing work too, and a dear friend has brought me into a project which doesn’t require a huge workload from me. For me, it’s a bit of a trial on whether I can cope – physically as well as mentally and I’m hopeful it will go well. I’ll probably have to report back on that one as it happens.

For now, I’m really grateful I had an MRI that apparently nearly killed me, because since, it feels a lot lot more like I’m actually living again.

2 thoughts on “The last time I nearly died”

More about me on the about page, or on Twitter.